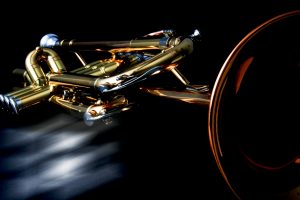 The Calgary Round-Up Band performs before more people in a single season than most professional musicians do in their career. With over 25 performances each year, the Round-Up band performs in front of over 2,000,000 people annually.

By promoting pride and confidence in themselves, the Calgary Round-up Band provides an opportunity for band members to be role models in their schools and in their communities. In the 2013/2014 performance season, nearly 200 youth joined the Calgary Round-Up Band from communities throughout Calgary and the surrounding area.

The Calgary Round-Up Band calls for a high level of commitment from its youth members; requiring youth to develop self-discipline and teamwork, to become self-motivating, to develop an inner drive for excellence, and to build social skills. All of which will have a positive effect on their lives, their families and their communities for years to come. Youth typically invest nearly 100 hours each year in actual performance time and well over 300 hours each year in rehearsal time. Rehearsals and performances are physically demanding and mentally challenging and include musical, marching and dance instruction.

Core Value #3: Cultivating Musicianship, Performance Skills and an Appreciation for the Arts